or covert speech or inner speech.

Earlier this year they had recorded speech signals in the auditory cortex of the brain to see where in the brain they were present. They were signals measured from the speech centre of epileptic patients’ brains who were already undergoing surgery. These experiments are normally done in a non-invasive manner but this time they took advantage of an open skull where other work had to be done and decided to ask the patients to read aloud and also read silently as they wanted to see where in the auditory cortex these signals we recorded so they could use this data in the future. Especially in those patients who could not communicate verbally with them. These self-talk inner sound recordings were not sounds that were vibrations in the air or sounds that have gone past the hearing system. Silent speech were inner sounds that were also shown to make an impression in the auditory cortex that can also be recorded. 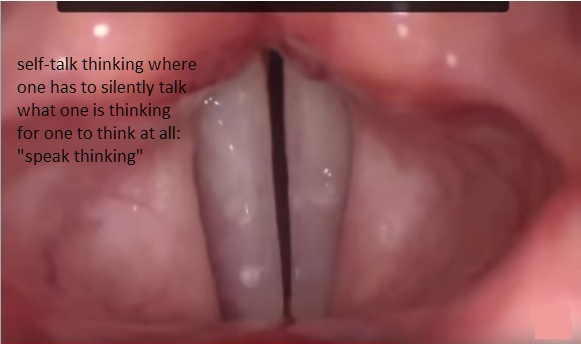 In fact, see if you can read a sentence or comprehend what is read, without also having to self-talk first. You will feel the slight flutter of your vocal cords or the soft sound of your chest cavity while you are thinking. In this experiment earlier this year they showed us where in the brain sound, not from the vibrations in the air or through your hearing, but sound within your inner self which is also recorded in the brain. Why would the brain want to know what you are self-talking to yourself? Because thinking itself is self-talk and it needs to hear you first to process your thoughts, or to spin it into an idea. It needs to know what you want of it. This is an anomaly in oneself that one can use to bring on a silent mind in oneself as they do in meditation. Stop self-talking and then no thinking which brings on the silent mind. Use the anomaly to your advantage. Don’t think if you do not have too as in psychological thinking.

Inner speech. Covert speech. Verbal thinking. Self-talk. “Speak Thinking”. Different words for the same thing. All inner sounds recorded in the auditory cortex of the brain. But we can very easily prove to ourself if thinking itself is also all of these things above. That thinking itself is sound first. That the brain needs to hear you first for it to know what you want to think and that the thinking process can only proceed of it is also simultaneously followed by self-talk of your intended thoughts.

‘They’re not thinking a sentence, they are speaking a sentence silently,’ says Mark Huckvale, head of the Research Department of Speech Hearing at UCL.

‘They’re imagining how they would speak a sentence and, in doing so, they would excite the motor cortex related to moving the articulators.’

This same mechanism could work the other way, similar to how cochlear implants work to help deaf people now.

‘Somebody with a set of electrodes in their auditory cortex could get sensations of sound,  even though there were no physical vibrations of the air,’ says Huckvale.

These experiments have shown us that inner speech has a place and a purpose in the brain. We either speak aloud so someone can hear us or we silently speak what we want to think so the brain can hear us and process our thoughts.

(self-talk thinking is only one aspect of thinking. As a personal observation: it is mainly our frontline thinking process that is an interactive form of thinking where we can take an observation and spin it into an idea, drives creativity in oneself, and creates the rest of the shenanigans in us.

One can stop the interactive self-talk thinking easily by stopping the sub-vocal speech. This brings on the silent mind and my experience is that the mind with time remaining in the silent mind state will also see pictorial thinking and intuitive thinking disappear altogether resulting in a no-mind state of just being and consciousness awareness of just observation and watching with a kind of non-judgemental state of being and with no interaction with anything one observes. If one remains in this state, the mind and memory of it all disappear completely into nothingness. There is no memory of existence itself until the mind returns from the void and the whole dream of existence returns which reminds one that reality and life itself is just an illusion of the mind.)

Source of the article in the link above.

Diagram from: Reference 16 from the source article: