There is an interesting history to this concept but I think the flow of this idea of a one-world-one-government had already begun many years ago and it is just following the movement of the natural laws of nature. Even if humans have initiated the process it is only at the directive of the cosmos. The future is towards unity. The coming together of the United States 200 years ago, the European Union today, trade packs in South East Asia consolidating the region, China building railways to connect its surrounding regions and a line has already been built to take a train from China to the United Kingdom, for the transport of goods. Soon they will pin all these regions together and remove the borders. It is inevitable because it is through the flow of natural law that people of the planet unite.

It is only due to the limitations of the human mind that does not allow this right now. The mind is a multi-view system and there is too much of this and that, in the minds of people at the moment. The mind is still in the evolutionary sliding scale of things until it discovers a way to take a giant leap forward in the future.

At the higher cosmic levels, you find that we are all one and unrecognizable from each other. As the quarks and gluons and bosons start to create us humans you find that there are other levels to this creation called mind and personality.

These minds and personality have an operating system of their own running them and they have bugs and limitations just like your computer and internet service provider. There are some things they can do and some things they cannot do. For example one of its limitations of the mind is it cannot see past the past in you. It is experiential in nature. It only knows what it experiences. It does not know how to access the unknown as it is not in its experiential past and hence it cannot create anything new. It cannot take giant leaps into the unknown.

This is where human nature starts to differentiate from each other. People become this and that and they are not one any more as their minds start to develop a multi-view system. They get this freedom to create in their minds and they think it is all real or right and they use these ideas to create multi personalities in the population. The mind creates a lot of lies or illusions, from the things it experiences, and it thinks these images are all real.

An idea is an illusion of the mind, something made up from a fact, like an observation. Then it gets spun in the mind beyond recognition. It might be a process of the mind but it not the same as the tree outside your window which is a fact and real. There is a difference between a fact and an illusion of the mind. The cosmos and nature and in you, there are facts that will always be true, no matter what you try and spin it into, but there are ideas in your head that are not real and just an illusion.

You can change a fact in you to what you want by just spinning it in your mind to become something else. The tree always has been, and it is not made from the mind. It is a fact of nature and its source unknown (beyond the seed). It is ancient and part of the natural process of things and they always live by the laws of nature.

Take the electron below that is spinning around the atom: it is a fact and will always be such and a law of nature. The image is real. You can click on it and see what it does – you cannot change the way it spins. It is a fact of nature. It will always do what you see it do. It is controlled by natural law. There is an underlying natural force which is always what it is and will always be such, not like the ideas in your mind which can be this today and that tomorrow and you use those limiting ideas like it is a natural law, when it is not so. The mind creates lies and generates illusions. If you click on the mind it will change that idea into something else. If you click on Natural law which is a fact and unchanging.

This process of creativity in us which might be used to create innovations is also used to create multi-views. Hence the universal brotherhood that started at the sub-atomic levels have now diverged and the people have separated themselves from each other because of their ideas and their thoughts.

Having said the above, there is a society which was started in 1875 in the United States which studied all the religions in the world and formed a common thread in its teachings:

You can see here how they had recognized the departure of the human race from each other via the mind and interpreting religions differently etc and decided to glue us all back together again. There is something of the natural law shining through those statements above.

Some others have even decided to make this whole concept more visible: Take the Sikhs for an instant who were created about 500 years ago: their external form is to depict their return to the natural laws to guide them. Their external form is a daily reminder to them that natural laws exist. Their holy books have teachings from all races in it and they recite them in their temples every day. They don’t say it is from this or that as they lovingly listen to them all. Universal truths have no form that makes them different but the form can be used as a reminder, every day, of the presence of universal Truths in us. as the mind is the slaver of Truth and the “cain” of universal law.

What is the relation between the non-sectarian societies in the world and Artificial Intelligence: they both still have the same problem: whether in the human mind or in coding AI, they all depend in the past in them and they are multi viewed and still diseased by “sectarian squabbles in psychology”. To the individual, it is the spinning of the psychological mind. Shut it if you don’t need it via “speak thinking” where you have to silently speak what you are unnecessarily spinning in psychological thinking. You stop silently speaking what you are thinking and you will find that thinking stops altogether. You cannot think any further if you stop silently speaking what you are thinking. In psychological thinking, the creation of illusions in the mind stops when “speak thinking” stops. This is a form of walking-talking meditation to silence the mind. Cross-legged meditation is a more complex process of silencing the mind. Live in silence, to only and when needed to come out of it, to allow the cosmos to show you what the Truth is and it cannot do this when there is too much noise in you.

The circle of the Human mind needs to come back full circle to where the beginning is the end again, where at the subatomic level we are all one and created according to the principles of the universal brotherhood.

Perhaps it is just a matter of seeing it for “what it is”, as others in society have, and a matter for the evolution of the mind to progress unhindered. It is not if, but rather just a matter of time before one becomes 1 and how long it takes will be how long you take to see the TRUTH of things. 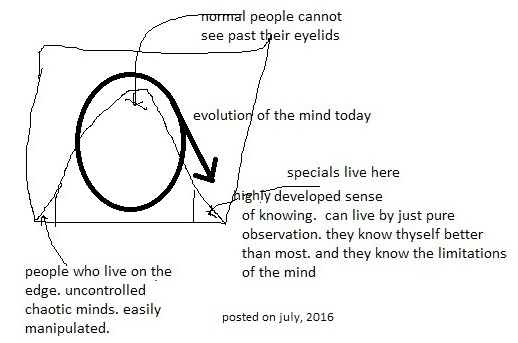 There is nothing that is higher than the TRUTH. The reference to the Truth does not lie in the mind, with its multi-views of this and that, as the Truth is unchanging, but perhaps the mind can only act as a tool, to seek the repository of the Truth, that will always be, omnipresent, always real, in both internally and externally to the universal brother-sisterhood. When your mind becomes silent the Truth is and that is you connected to the universe accessing the repository of the cosmos with its natural laws.

Just beware of the Lie in the Truth in you!