Recently I was asked to explain “about” my artwork after a visit to my website siriperera.com. Content can be a struggle at times to explain as they tend to filter in with time and is ever-evolving. I remember a group visit to John Hoyland’s studio in London and I asked him how he gets his titles for his abstract work, and he said he wrote them in a book as the titles pop-up in his mind. His titles must come to him, like magic, and he would then paint around them? I remember he showed us a painting called “Mind Horizons” with his circular pourings, but real and tangible in the centre of the canvas and fuzzy at the edges. It was a huge painting that was side to side of his large studio and to the ceiling. He stood both ends of the canvas on a couple of paint tubs and held it for us to admire. I thought the title fitted well with the image.

He showed me his sketchbook, and they were mostly abstracted images of a landscape perhaps he was looking at, and I asked him why they were all abstract images, and he said he was trying to capture the essence of what he saw: not nature itself but “an equivalent of it”. Hoyland had an extended mind like his painting “Mind Horizons”. There was something of the natural in him and how he painted. I also asked him the difficult questions as they pop-up in my head: why keep painting when he already had everything discovered done and dusted. He said, he just had too — the urge to create.

I have seen very successful artist wonder in their later years if their work needed a title or not or even a content as the image itself was sufficient. The Truth has no name or image in mind, but you will know it when a painting stands before you without a narrative in it to distract your mind from embracing its wholeness for what it is as an “equivalent of the natural law of things”.

So when a visitor asked me to describe my work the reply was:

It is nice of you to comment on my site and work. For me unknowingly art had been a stepping stone to me spending more time looking at my mind. Art had been a dialogue between my mind and art and so in its manifestations on canvas, I started to see my mind at work. From this, I discovered “speak thinking” or “verbal thinking” and realised that the “new” in art is almost impossible to come too from the verbal thinking mind as it only deals with itself and its past and the known. (“Speak Thinking” is where one has to silently speak what one is thinking for one to think at all). Perhaps you can check to see if this is true or not because if you can see this then transformation of the mind is easy with the advent of the silent mind. Transformation in the sense that one can access other mind spaces where the “new” in oneself might be able to show itself. So it comes back full circle to the process of making art and the mind.

Interesting you write to me now as I just finished the redrafting of this piece on “mind spaces” and the thinking process: “Can we start a conversation with Brahman” (or the Universal Mind/Cosmic Mind). Just to show you how art showed me how my mind works and using the different mind spaces as a baseline to work from:

Most of the artwork here you see if from me falling off the edge of the frontline of thinking which is the chaotic noisy verbal thinking mind and into the other silent mind spaces to work from. At the time I was chasing this blindly but being true to myself and to what I discovered by the process of making art, I documented them, and only perhaps now looking back I see what I have done for myself: made art and to a certain extent transformed my mind with it by having a dialog with the process of making art.

From reality to abstraction:

Falling off the edge of perception:

The shadow finding its true self:  The new comes from no-mind.

Mind Spaces where the self begins to disappear: “MInd Horizons” 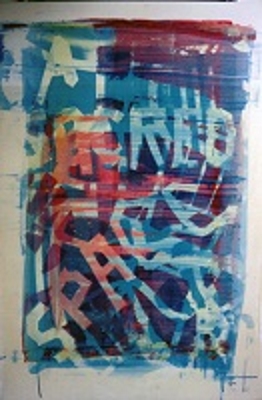