It is interesting that you ask this question. Nepal is mainly Buddhist. When I visited the country in the ’80s I was surprised to see Buddha’s statue depicted as Hindu idols would be depicted like a Buddha’s statue having many hands. So when I was at the Nepali embassy in India I asked why is Buddha depicted in such a way even in Buddhist temples. So the answer was that in the time of Buddha there was no Buddhism as such as all was the same. It was all Hinduism I guess. But it separated later because the thinking was different.

Why and how you do this is also because of the way you think. You create a personality that is a construct in your mind by what is called verbal thinking. First, let me describe what verbal thinking is then you can see why it is separate from other forms of thinking you have in your mind. Verbal thinking is where you have to silently speak what you are thinking for you to have to think at all. It is the thinking that creates the constructs that you make in your mind that then gets incorporated into personality. A construct is when you take an experience or an observation and then turn into something else, like an idea in you or a new thing in you that you then add into your personality to build up a you in YOU. Verbal thinking is also behind the creative force of ideas. It can be considered the frontline of the thinking process. But what is interesting to know here is verbal thinking only creates illusions in you. It takes a fact and turns it into a construct or an illusion. So this personality in you is the one person in your body who is made up not from facts but of ideas or illusions created by the self-talk thinking mind.

Then through the ages the mystics and Buddha and Krishna all part of Nepal’s great culture at a time were all one and knowing that personality was only a construct and a lie in them – they set out to find their TRUE self.

So they came up with meditation. They used meditation and the mantra to get rid of verbal thinking. They must have realised that they need to stop this process that is creating all these constructs in their mind and the process of meditation was the answer. See how meditation stops verbal-thinking which is a process that creates your thoughts: it uses the mantra to distract you from silently speaking what you are thinking and in this way it stops you verbalising your thoughts. Remember that in verbal thinking you must silently speak (notice movement in your vocal cords) what you want to think for you to have to think at all. This is an anomaly in you and without verbalising what you want to think you just cannot think. 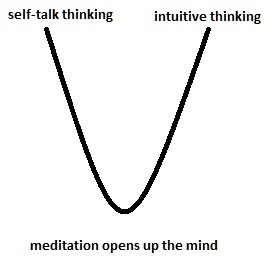 So they discovered that this brought them into the state of the silent mind, with verbal thinking kicked into the long grass for now when it is not needed. In the silent mind with all the thoughts of the other you stopped in its tracks temporarily they realised that that sense of awareness was still present and watching. This other you, was still there watching with you. So they chased it down the mind with the silent intuitive thinking to meet and greet the other you: your True Self, this awareness that is the other you which is a sliver of the great Brahman or the Cosmic Mind of nature: The Other You. Watching Everything. Conscious Awareness: your True Self with a repository/memory of its own. So you are 2 persons in one body with 2-minds -speaking and watching each other. 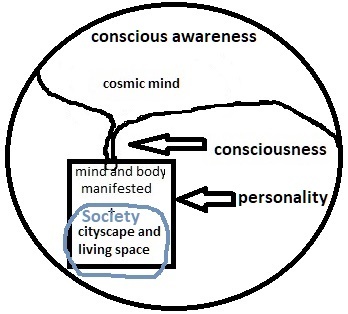 The big picture of how to find the other you: leave behind your self-talk thinking mind to find your True Self. 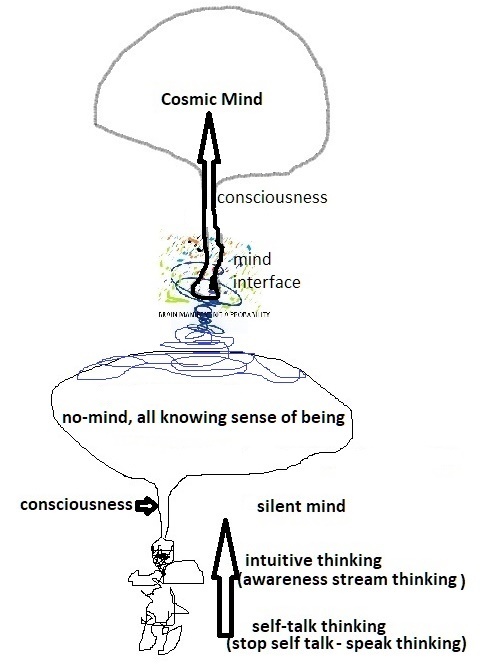