To get to the ends of one’s mind is an evolutionary process by contemplation. The mind has to see what it is by itself. It is an experiential process. We come to it off the back of others through the years in the past. To think that a man about 2500 years ago found this out by sitting under a tree: Buddha. Let’s see what he found out inside 1000 words. The whole big picture and from it find out what our priorities should be before we embark on our next big project so it runs super smoothly and with big success in anything you do. Easy Peasy.

Bhante Punnaji, giving this talk is also a Doctor of Medicine who became a Buddhist priest. So he looks at what it means to be a Tathagata from also scientific and philosophical perspectives. A Tathagata is one who is able to see all and Buddha was a Tathagata.

I came to discover some of this through the Arts. Art to discover the self while observing the mind while making Art. Great medium for this purpose. The courage to create and free to create with no limitations until one finds out that the mind has its own limitations in that it can only create out of its own puzzle of the past in oneself. One sees this in the process of making art. It is an experiential process of finding the fact in oneself by doing. So how does one get around this to discover the new in oneself?

This is just the very beginning of the process of getting to be a Tathagata. Of course one can also remain inside the cocoon of the verbal thinking personality self where the beginning is also the ending in an ever ending loop of making the same mistakes over and over again. This works too and it maintains a working process of its own. One can get comfortable by remaining in that loop and might think that this is all to it and nothing else exists as possibilities.

I hope you can find time for this video but if you prefer one can leave the dessert for the end after reading the rest of the article first and come back to this after seeing the gist of the whole idea. 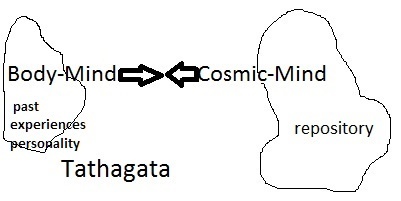 One sense from this video it is better to discover the mind at its best and then experience life: a Tathagata first and guaranteed success later. Just as the Buddha went through the evolution of his personality mind, through the experiential discovery of his mind and the dream of existence and differentiated between the facts and the illusions from these experiences and then through meditation and perception developed his unseen side in him, experiencing all the latent powers that came up (see video for his experiences with the Devas or spirit beings in the universe) and finally all culminating to become what they call a Tathagata. Remember that from this state of his mind he dispensed his teachings. It really gives us a working template and a pathway for us to follow. It makes it a lot easier if we look at the life of a Tathagata and see what it is like and what it should be like for us.

I was watching the 2019 science Christmas lecture and even they had caught on to this and describe how science has discovered what it means to give one more opportunity is like by opening up one’s mind to the unseen and the natural laws of the Universe. The writing in bold below is from that Christmas science lecture from the Royal Institution for 2019. The theme was how to increase one’s luck in one’s life and basically, they were indirectly suggesting how to get lucky by creating a lucky mind. How to be lucky by becoming a Tathagata. 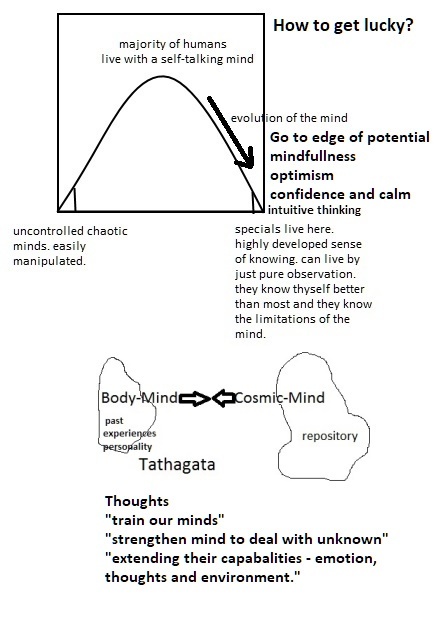 One can see how all of life becomes so convenient when one knows where the focus should be and from there become and do anything you want that takes your fancy to become a cog in the wheel of life and at the same time shaping it into becoming a life on earth as it is in the Universe with its natural laws: the Truth behind that big-picture plan in life. Become a Tathagata first and everything else will come naturally with it. What a lucky Tathagata: Buddha.

If you look at these texts below at what Buddha said after he attained enlightenment: He is only suggesting that the mind can be stopped. That life is a “dream of existence” created by the mind. That is the state that he had arrived at and that does not mean that that is what we should be always. It is an experiential state of mind that he had arrived at; a fact of the mind. He is just showing us this fact. After his long experiment of the discovery of the self and the mind, he could have easily got off from under the tree and walked back into his palace and continued with his life and nobody would have thought any lesser of him because he had come to the end of his mind and he showed us that there are many different mind spaces and a lot of how it works can come to a standstill and then start up again. We can choose to live in any one of those mind spaces including the very end of it if we choose too.

The mind has stopped creating;

The emotional urge has ceased. 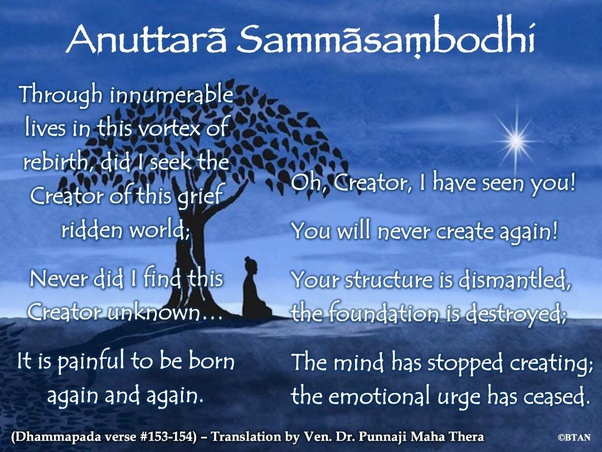