I heard this today in a live stream from India: all creative processes is from “beyond the known”. This is really what we are after so it is not just another puzzle from the known in us. The creative process does not belong only in the arts, but it is only in the arts that the new in the mind is at its fullest potential because it is not constrained by the needs of others and the constraints of a particular project. The mind can see itself and go beyond itself and beyond the known in you.

The thing about the arts, which is totally free to create, and the only constraint is that it has a limitation in that it keeps constantly creating everything from a puzzle of the known in oneself and off its past in you. Nothing new comes from this. It cannot seem to get off this state of mind. When you create a form with these limitations of the mind and you think it is new, it is only because it is new in your own mind and it is not universally new. Truly new is something created that is universally new to all. So the frontline of art moves forward at a slow pace with each step being just a puzzle of the old in you.

The other thing about the arts is that the studio is like a mini-universe with the artist in it. All of the universe is in that studio and in the centre of that universe is the mind of the artist. The mind is the driving force in the studio. When a project is underway the mind lives its full spectrum during the project. From its observation, that triggers an idea in you which then gets spun out beyond recognition of the original observation. Then the mind decides with a complete idea of how it is to be manifested. One complete idea and to represent it in art it can have a multitude of different expressions. Remember that every expression is made up by the mind. So if you are looking for the Lie in the Truth in you: then each of these expressions is a lie created by the mind. The original fact is the fact from which these lies were created by the mind.

Personality is created in exactly the same way by observations of idiosyncracies spun out in one’s mind. The little self in oneself is made up of these many lies. Then we use these lies to create society and culture. Our environment and businesses are created behind these lies in oneself. We create borders around our own idiosyncratic lies that we created as a group. We decide what our costume is going to be. We create financial anomalies from our minds to create the infrastructure of our environment. With all these lies that the mind creates what it is doing is really building a house of cards around us. So this is the Truth, the facts, in the lie in us. So when they say that we are creating illusions what they mean is that we are creating stuff with our minds which is not real and then surrounding ourselves with it. So what happens when the tipping point of this house of cards is reached and there is nothing left to tweak to keep it in balance? Its mad max all over again.

So what is the way out of this limited mind that we can use to find the “new” in us so we can use them to think out of the box when trouble comes our way? The mind has to sit a certain way to access the repository of the Universal mind where everything is true and off which the Truth of things only exists. If one is using the facts of the natural law and its forces to create our living space then we are only reinforcing our environment and not creating things at a tangent to it. Departures from the Truth of things only creates tension in the environment.

So the mind of the artist in his studio during a project see the whole spectrum of his mind being played out. It will go from observation and excitement while spinning it into an idea and then planning its multiple possible forms or representations and then manifesting one of them as a painting or installation or sculpture or into prose; a video perhaps? In between these spaces in the mind, there would have been some stage where the mind would have gone into the silent mode where all thinking had come to a standstill. Here, there is still a kind of pictorial thinking and intuitive thinking when the mind is silent. There are times the mind would disappear altogether with no mind in sight and no memory of where it had been while standing in the middle of the studio while looking at one’s creation. If one is observing the creative process and the mind at the same time one can see how the mind lays itself out to be observed.

The mind can go from chaos to a silent no-mind and disappear and return again. It is in here, in this spectrum of the mind spaces that the answer might be as to where the “new” in oneself can show itself. It can only show itself when the self is not present. When personality has disappeared and all the known and its experiences and thinking has come to an end and then the action of Truth can show itself to the mind with the Aha moment and its essence grasped by the thinking mind. So only in silence and in a no-mind state of the mind can the “new” show itself.

When IT appears it can come through in many forms. An Insight in mind is also the presence of IT. It shows itself not through this image you have of IT in your mind. It shows itself by how it solves your problems for you. That is how it comes through. Remember that it is an underlying Cosmic force, no permanent form yet still unchanging in essence. The mind has to sit a certain way in silence for it to show itself to help you. Krishnamurti calls it “consciousness awareness” – full attention of just observation (no thinking) with no judgement passed of what you observe. I have been through this process in the studio when painting looking for insight or solutions. Others say one-pointedness but if it suggests concentration then it is not that. It is like observing with the whole Cosmos behind you waiting for the “insight” or “word” to come through, yet not doing it consciously, deliberately, but naturally so in that state of mind.

I had listened to a video-talk between Jiddu Krishnamurti and David Bohm ( about how the mind can grasp the action of Truth and drew this diagram below as the talk progressed: 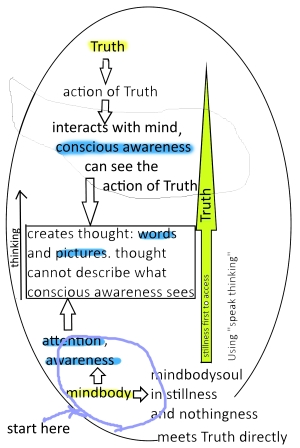 Thinking has to stop first and with the silent no-mind with a sense of active “being”, watching, conscious awareness can grasp the action of Truth, coming off the ether and then the personal mind can take over to process that “new” in oneself.

This can be said in more than one way but you will find the essence will always be the same. The mind up and down its sliding scale from chaos to no-mind, creates this “dream of existence” from the Truth in the Lie in you.

Art can find the pattern. 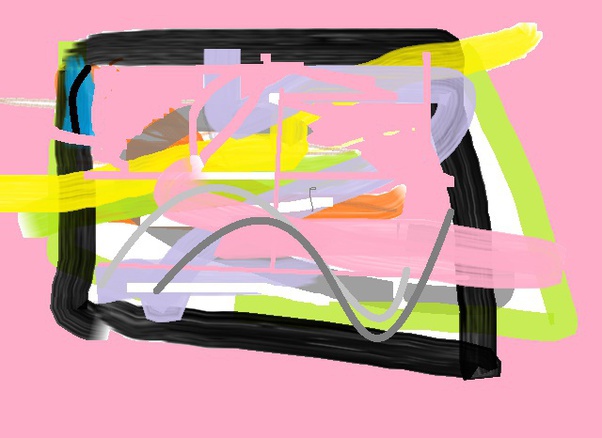